One of my favorite typos from when I worked at Apple was “NSTokenRage”. Rage…over tokens? I don’t know what that was about, but I’ve certainly had my share of puzzlement, frustration, and yes, rage, over NSTokenField, and I have the bugs to prove it.

First, tabbing out doesn’t invoke the same token validation behavior as typing in a tokenizing character within the field, such as a comma or a return.

In the latter case, the delegate’s tokenField:shouldAddObjects:atIndex: method is called, and so the delegate can choose whether to tokenize the user’s input or not. In the former case, however, it is not called, nor is any other standard delegate method. Tokenization of the user’s input just…happens.

Here are screenshots from the sample app I submitted with the bug. In the token field, duplicate tokens are not allowed, and if you type in duplicate text, it should disappear instead of being tokenized. Here’s an example, where I’m about to enter the duplicate text “b”:

If I then type return, focus stays in the token field, and the duplicate token is rejected and disappears:

But if I type tab, which changes focus to the text field below the token field, the duplicate token is erroneously created: 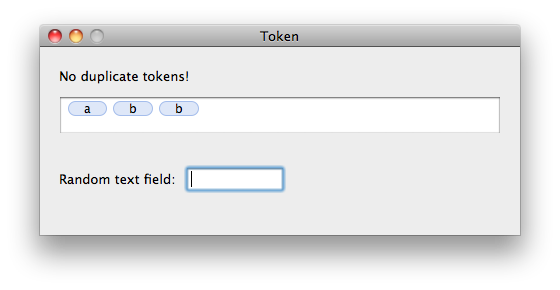 The downside of this approach is that we get entries like these in Console for the application:

A related problem is that there is no delegate method that is called when the user deletes a token, no tokenField:willDeleteObjects:.

Without this, it becomes harder to enforce a no-duplicates rule. The workaround I used was to implement the NSControl delegate method controlTextDidChange:. It’s a lower-level access point, but at least it’s guaranteed to catch all editing changes.

The last major issue I saw was an inability to do keystroke validation by the standard Cocoa technique of subclassing NSFormatter.

Apple’s docs list three methods you need to override in a subclass:

Only the last actually has to do with keystroke validation. The first two do the same sort of round-tripping from display string ↔ represented object that we saw in NSTokenField itself.

The trouble is, NSTokenField has its own internal attributed string format that is impossible (or seems like a bad idea to me, anyway) to try to replicate. It would be nice if there were a way to just implement the third method, and tell the formatter that, hey, the existing formatting is just fine, thanks. But as far as I know, there isn’t.

I got around this myself by implementing a custom field editor and overriding a private method that is called to actually set the text. I’d much rather have a better way.

There’s also the more minor issue that it seems to be impossible to set the right arrow key as a tokenizing character (rdar://8849747).

And that’s all I have to say about NSTokenRageField.